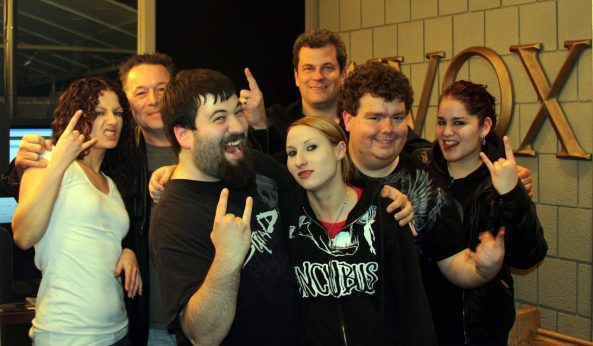 Here is the official press release from WVOX New York

Jocks Matt O’Shaughnessy and Tony Gizzo unleash Low Twelve in a prime time feature interview on New York’s WVOX Metal Mayhem show Friday, June 21st at 9:10pm Eastern on WVOX.com Worldwide and 1460 AM locally in New York. Low Twelve came roaring out of Bloomington, Illinois in 1998 and was founded by bassist/vocalist Pete Altieri and guitarist Tim McCleland. Low Twelve has shared the stage with the likes of GWAR, Cannibal Corpse, Mastodon, Pro-Pain and Misery Index among others of note. The group has now played well over 300 pounding live shows during their 15 year career. They inked a deal with Dark Star Records in the Fall of 2012 and have major distribution through Sony Music. The band was coined “beautifully brutal” in a review of their first demo. Their music defines brutality and has become a staple in any description of this ground-breaking band. Low Twelve’s fifth metal opus, ‘Skin In The Game’, features ten innovative and brutal tracks with two special bonus songs. Plus a bonus DVD entitled ’13 Brutal Years’ that provides a “brutalmentary” on their history. Low Twelve’s powerful line-up is Pete Altieri on bass and vocals, Meister on guitar/vocals, Les Aldridge on guitar and Travis Waterman on drums. “I have know Pete Altieri’s ferocious and great metal work for a long time now…and WVOX looks forward to creating some mayhem with Low Twelve on June 21st! Get ready…Low Twelve has landed!”, rages Matt O’Shaughnessy.

For More Info and to Listen Online go to: www.wvox.com